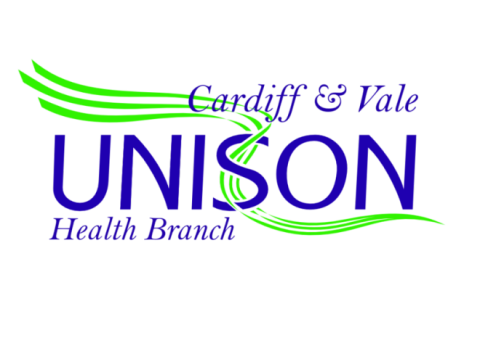 Each meeting is scheduled for 1/2 hour duration and all members are welcome and encouraged to attend.

Due to the Corona Virus it is not possible to hold face to face meeting as normal so these meetings will be held Virtually.

To join the meetings members are required to download the

All meetings will be 30 minutes each and held virtually via

*All meetings to be `virtual’ unless otherwise notified closer to date*

Half of all staff absences are Covid related

Working parents – particularly mothers – are in an impossible situation this lockdown. UNISON is calling for paid parental leave to support them

Worried about your finances? UNISON can help

Christina McAnea is the new general secretary of UNISON

To mark International Thank You Day, the 14 unions are urging the public to use social media to champion the vital work of all health staff by supporting a decent pay rise.

The unions – representing workers including 1.3 million nurses, cleaners, administrators, physiotherapists, healthcare assistants, dieticians, radiographers, porters, midwives, paramedics, and other NHS employees – are asking people to share hashtags such as #FairPay, and to message their MPs.

A video released to mark the event features a diverse range of the staff who keep the NHS running and continue to do so through the pandemic.

UNISON head of health Sara Gorton, who also chairs the NHS group of unions, said: “The NHS is facing the worst crisis in its history.

“Everyone is relying on health workers in many different roles to see us through. Clapping has been a way of showing support, but the government now needs to pay up.”

“But health care staff need to hear long after today there’s public support to treat them better, recognise their skill and pay them fairly.”

Executive director for external relations at the Royal College of Midwives Jon Skewes, who is also treasurer for the NHS group of unions, said: “NHS staff are currently holding the country together. They’re facing a challenge like never before, which is made worse by staffing shortages.

“The government needs to act now to acknowledge their contribution and commitment. Ministers must give staff an early and significant pay rise that would help restore their pay in real terms. It would also ensure there are enough staff to future-proof the NHS."

Stay up to date with our branch app! 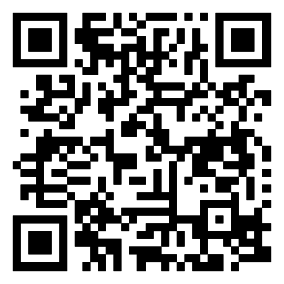 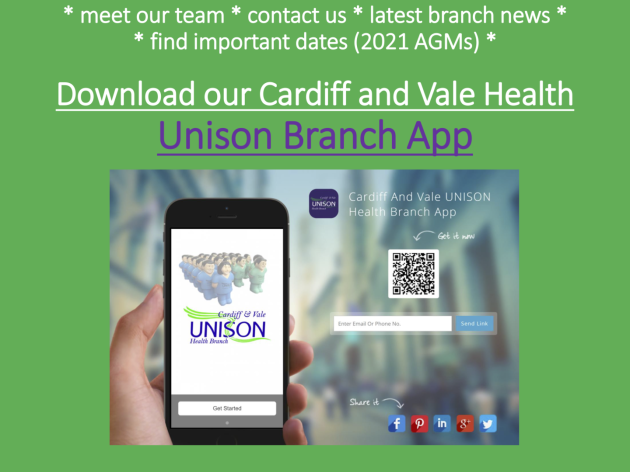 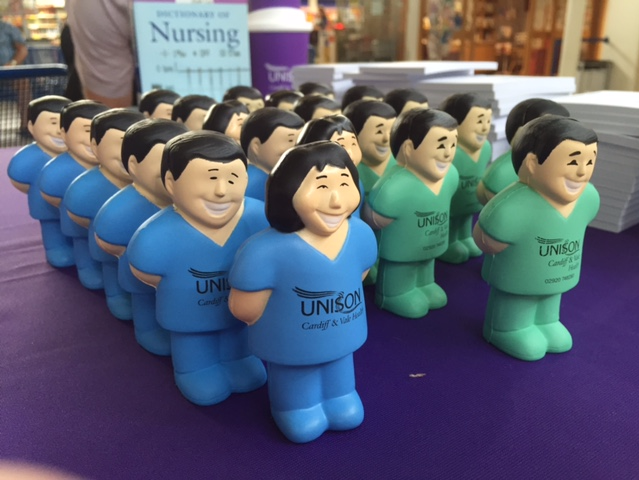 UNISON Wales has been in ongoing discussions with employers at local and all Wales levels, and also with Welsh Government Ministers, seeking agreement that all staff who are required by their employer to work from home, should be paid an allowance by their employer to cover the extra costs incurred by home working. Since the […]

How one of our rep's, Angela Gorman, went on to become CEO of Life for African Mothers and earned herself an MBE in the process.

Frequently Asked Questions for NHS Managers and Employees FAQs up to date as at 15.00, 1 October 2020

No one should be profiting from test and trace failure, says UNISON

Government must put system in hands of public health bodies

One Team2k was agreed by UNISON Health Service Group Executive - a committee of UNISON activists across the UK who all work in the NHS, back in June and we were the first union to formally launch a pay claim back in July.

A lot of thought was put in to the 2k for All figure which we believe is affordable and achievable. UNISON also surveyed our NHS members on our proposed pay claim and of those that responded over 84% agreed with a 2k pay claim and also with an early settlement this year instead of waiting until April 2021.

UNISON was the first union to formally lodge our claim in writing with the UK Prime Minister. UNISON had hoped for a joint unions approach on Pay but unfortunately other unions have set their own figures, which some believe are unachievable and unrealistic in the current economic climate.

Most unions initial position was 5% but then this changed recently to a higher figure.

UNISON has remained consistent that 2k for All AFC staff means no one gets a pound more or less than anyone else.

We have calculated our pay claim to cost £3.4b.

UNISON is a member led union with members making the decisions on key issues that affect them.

Please advise the member of the above information and also to the UNISON website for more info on our NHS Pay claim .

Check this link out as well

For the latest facts about Corvid 19 check out

I have an underlying health conditions should I be self isolating?

My Partner/child has an underlying health conditions should I be self isolating?

I am aged over 70 should I be self isolating?

I am in at risk group as identified by the UK Government should I be self Isolating?

I am pregnant, should I be self Isolating?

If you have an underlying health conditions and you are not sure about attending work go to phw.nhs.uk for guidance then speak to your line manager.

What is the situation with PPE?

We think we need more or better PPE?

We have no face masks available in our section what should we do?

Staff in my area are being told not to wear masks as there are not enough to go round.

The Health Board is receiving large amounts of PPE on a daily basis. The situation within the Health Board is being monitored and reviewed daily. If you think your area has insufficient PPE speak to your line manager.

Ive been told that I will have to work in another area, do I have to change where I work?

Ive been told that I will have to work on another site, do I have to change sites?

We are in unprecedented times which means that the Health Board has to change and evolve to meet the challenge of Corvid 19, this will often mean redeployment of staff to meet the demand and it is expected that staff will cooperate where possible. If you have issues about a proposed redeployment speak to your line manager in the first instance.

I’ve been told that I will have to do different and unfamiliar work is that right?

Given the challenge of Corvid 19 which we all face, this will often mean staff are asked to meet the demand by being flexible and adapt to the necessary changes, it is expected that staff will cooperate where possible. Staff will not be expected to work beyond their pay grade! If you have issues about a proposed change to your work speak to your line manager in the first instance.

The government has said that everyone who can should be working from home, does that apply to NHS staff?

I don’t see patients why can’t I work from home?

I have young children and no one to look after them while I’m in work what should I do?

As NHS staff you are identified as a Key Worker by the UK government and therefore schools will be open for your child even though all schools are technically closed for the foreseeable future. Check your Local Authority website for details about provision for your child.

The Minister has agreed the reinstatement of the unsocial hours payments from day one for a temporary period and to enable the release of the ‘held’ back pay.

(This is an occasional Newsletter for Branch Secretaries in Health)

Due to the current situation regarding corona virus, the Health Minister has agreed to the reinstatement of the unsocial hours payments from day one for a temporary period.  The Minister has also agreed to enable the release of any ‘held’ back pay.

We will be working with Welsh Government to update the FAQs and to arrange for release of the payments.

England have agreed guidelines for Student Nurses which were circulated last week.  We are currently awaiting confirmation of the position in Wales.

We know that there are problems about PPE and Tanya Palmer our Regional Secretary, is daily letting the Welsh Government know our concerns.  Can you let us know if your members face further problems over the next week.

Coronavirus Guidance and Advice from the UHB

Have you received the latest copy of U magazine?

If not your details may be out of date.

KEEP YOUR DETAILS UP TO DATE!

Help us help you!

It is important that you keep your personal details up to date.

Have you moved address, changed your telephone number or email address?

If you have, you need to update this information!

If we don’t have your correct contact details you will miss out on membership offers, announcements or information about voting ballots that may be held.

The 'Save Barry Hospital Ward' petition is live on the Welsh Government website. Please take a moment to sign and join our campaign to defend the Hospital ward."   https://www.assembly.wales/en/gethome/e-petitions/Pages/petitiondetail.aspx?PetitionID=1601 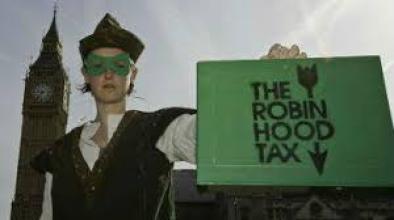 Robin Hood Tax resources are attached for your use.

The PowerPoint presentation is also attached and below is a link to the councillor’s hub with model motions and briefings etc.