As the Prime Minister announces a range of measures to improve patient care in hospitals, UNISON, the UK’s largest union, is warning that this will be difficult - if not impossible - to achieve at a time when NHS Trusts are facing serious financial problems. The union said that, in particular, it would be difficult for nurses to realise the Prime Minister’s ambition for them to exert more independence and authority if there is no money or process in place for them to address problems.

In a recent UNISON survey into patient nurse ratios, more than 70% of respondents said that there was insufficient nursing staff to deliver safe, dignified care.

“The NHS is constantly evolving and developing new ways of improving patient care. Many patients are very happy with the level of care that they receive, but for those that are not, it is only right that improvements are made.

“Many health workers would welcome more independence and autonomy, as well as training to allow them to address problems. But this will be pointless unless there is money available to put in place the changes that they suggest.

“Nurses know that lack of staff and increased demand are real issues that affect the quality of patient care. However, all across the country, nurses and other health workers are losing their jobs, wards are closing and patients are having so-called non emergency operations cancelled. Trying to improve patient care in the way that the Prime Minister suggests, against a backdrop of cuts, will be very difficult, if not impossible.

“Staff, as well as patients, are a good barometer of how well services are running, and should be asked if they would want their loved ones or friends treated at the hospital in which they work.” ﻿﻿

The fight to save the NHS goes on

"The message from this conference must be: 'We may have lost the battle, but we have not lost the war'" on the Health and Social Care Act, service group executive speaker Mary Locke told UNISON health delegates in Brighton this morning.

"We need to make sure that government looks back on getting the Health and Social Care Bill passed as the easy part."

Looking back on the 18 months of UNISON-led campaigning since the government's white paper "appeared out of thin air", Ms Lock recalled: "We made the NHS toxic all over again for the Tories.

"No one will believe that airbrushed poster of David Cameron saying the NHS is safe in is hands ... because he is a liar, liar, liar!"

Moving a composite motion on the new Act and privatisation, Maddy Nettleship of Gateshead health branch declared: "We, together with our local communities, will defend NHS.

"The opposition coalition built up as Bill went through Parliament will not go away."

And she noted that attacks on terms and conditions by local NHS trusts and attempt to argue for local pay bargaining “benefit no-one except the private vultures circling our NHS."

Examining the services that private 'any qualified providers' are already looking at in just one trust, Pat Davies of the PT 'B' sector committee noted that, "again, this government is targeting most vulnerable groups in society with AQP."

But there is an alternative, as Roger Nettleship of South Tyneside health noted.

Although the prime minister had "thrown a grenade into the NHS" to fragment it and break it, UNISON knows that "health care is not a commodity, it is a need that needs to be provided for."

Conference agreed and voted to continue and intensify the Our NHS Our Future campaign, working with other organisations and pushing the case that there is an alternative.

Speak up for the NHS

To protect our NHS we need to act now. The Tories and Lib Dems are playing politics with the future of our health service - we need to stop them.

If you share our belief in a quality health care system that is publicly owned, not driven by profit - join our campaign. 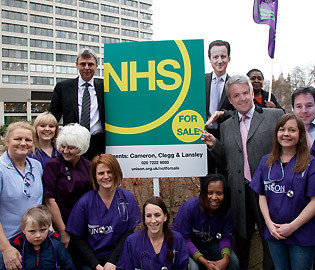 The great big hospital sell off