YOUR UNION CALLED YOU OUT ON STRIKE!

Many of you answered, We thank you!

Message from our Branch Secretary 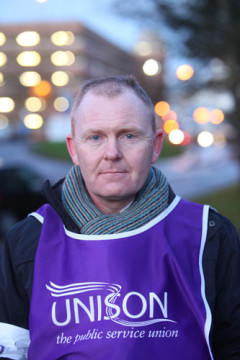 Hi Everyone,
I would like to take this opportunity and pass on my congratulations to you all for your hard work, dedication and stamina shown over the last few months in preparation for our Strike day on 30th November.
I am sure you all will agree the day was a fantastic achievement for UNISON where we covered all of our hospital sites with peaceful demonstrations.  We had many of our representatives who had radio and television interviews which went down extremely well and it was clear at the rally and throughout the media,  that Unison led this day of action. Our Branch was well represented at the rally and our fantastic,﻿ brand new,  banner was clearly on display for all to see.
I was extremely proud to carry the banner with Gareth and equally as proud to have an abundance of you marching with it.  All of us members lost a days pay yesterday but put that thought clearly out of our minds and marched with pride.
We know that it is not over yet and we obviously have further fights to come and I am sure we will continue what we did yesterday and clearly get the message to the UK Government that they are not going to take our Pensions away from us.
I am extremely proud of you all as a Branch and cannot thank you enough for your dedication and support you have shown to the Union!
Yours sincerely
Mike
Mike Jones
Branch Secretary 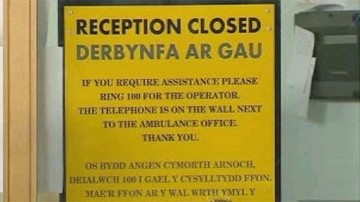 Striking outside the biggest hospital in Wales, pharmacy department technician Rachel Noble exclaimed: "It's unfair that we are being penalised for other people’s mistakes. We work hard and we should not have to live in poverty when we retire."

Ms Noble, who has worked at the University Hospital of Wales in Cardiff for eight years, added: "It is not our fault that the country is in a terrible state. It was not us who gambled all the money away."

Also on the picket line, fellow hospital worker Rachel Lloyd-Jones added: "I can't afford to work longer, pay more into a pension and get less when it's time to retire.

"Ministers are not taking into account the lives of the general public, especially the impact on families. I have spoken to patients and they are supporting us – they understand a strike is the last resort."

Former miner Mike Jones, who joined the NHS 20 years ago after his colliery closed down, observed: "One of the attractions of joining the NHS was the pension. To find my retirement plans have been put back is very upsetting. I am 48 and now I will have to work until I’m 66.

"My pension contributions are going to increase by 3%. We have not had a pay rise for two years and now the pay rise is going to be capped at 1% for the following two years."

UNISON branch chair Stuart Egan commented: "We need to send a clear message that what they are trying to do to our pensions is unacceptable. People have been planning financially for their retirement and this government has just torn things up.

"The NHS pension is £3bn in credit and our pensions are affordable. We are being asked to pay for those greedy bankers who are still receiving their bonuses. 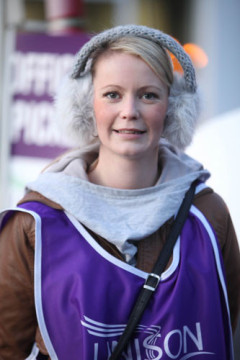 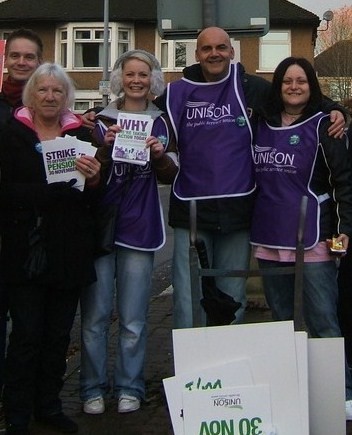 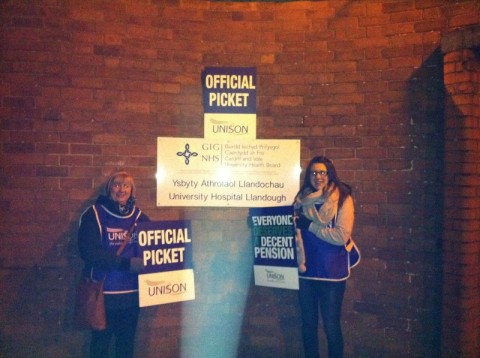 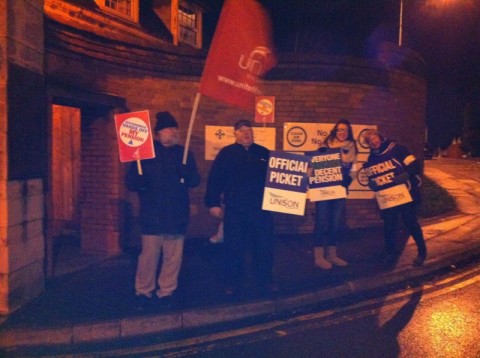 Tipping down at 6:45, but troops at UHL are in good spirit.

At this point, a lovely lady named Sally from West 5 turned up with hot tea, coffee and biscuits. We can't thank her enough - we were well cold! Shortly after a rainbow appeared. Our personal angel returned and repeated her generosity later that morning around 9:00 am. 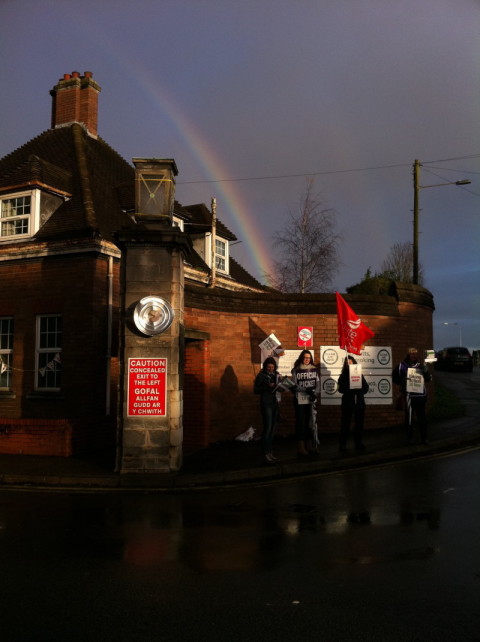 Rainbow over pickets at UHL (7 ish). 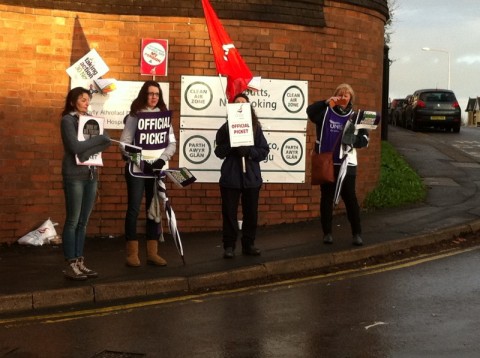 Stopped raining and getting light. 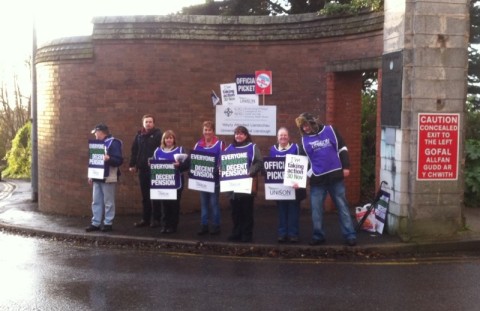 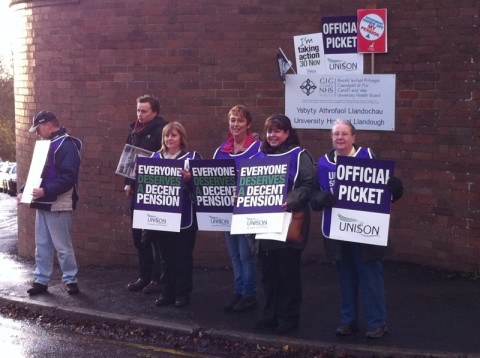 Staff from UHL picketing their site - be proud of yourselves- YOU WERE THERE!(8:15am). 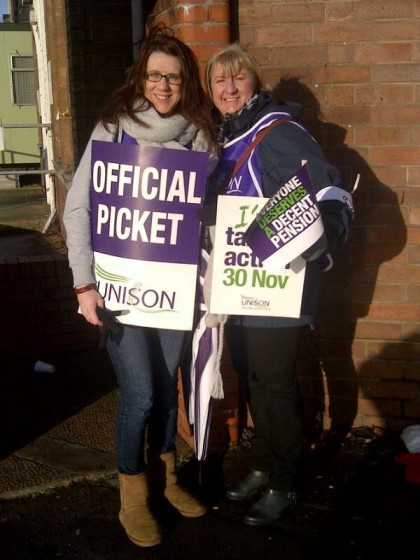 Double Act, Leigh Ann and Nic smiling in the face of adversary. 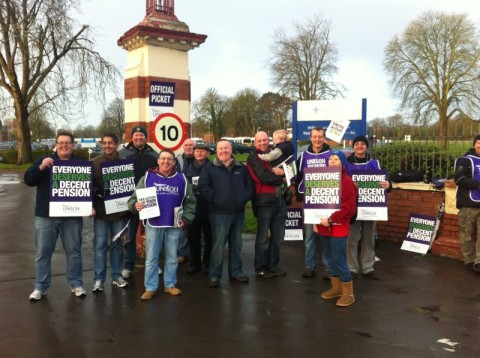 Whitchurch Staff picketing outside their hospital, well done everyone, YOU WERE THERE! 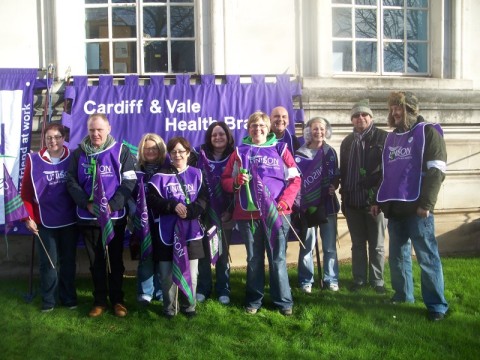 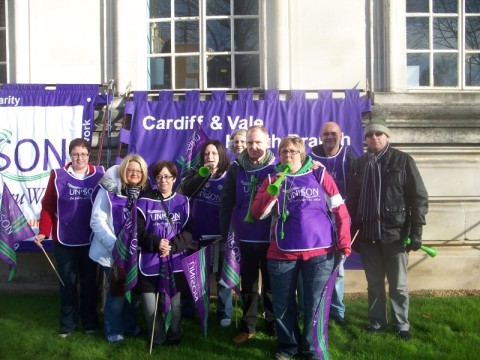 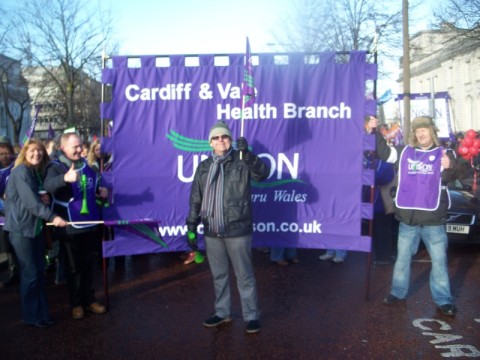 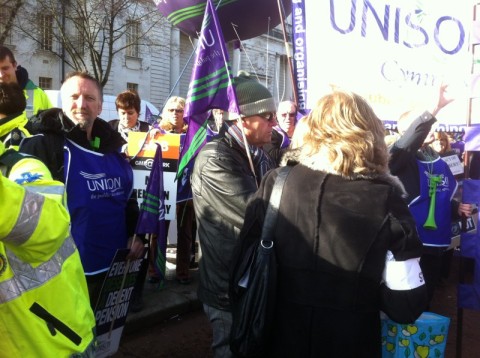 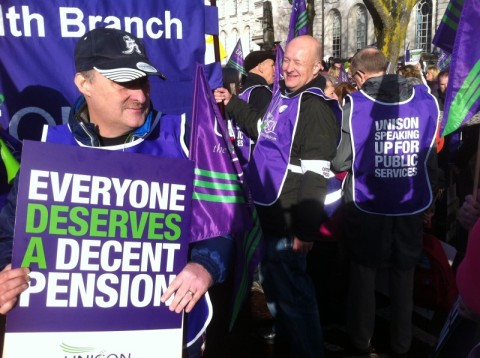 It's not funny Gareth! They're robbing our pension funds. 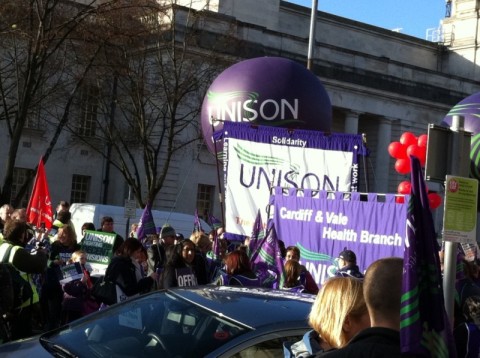 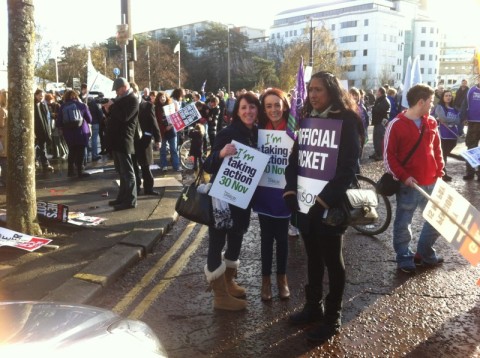 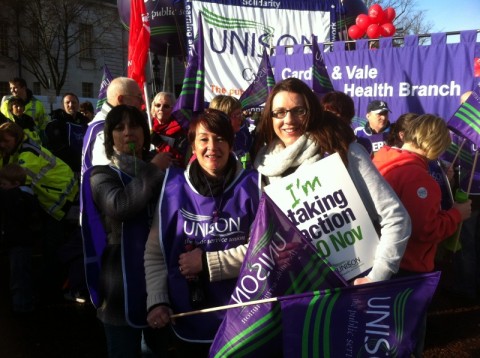 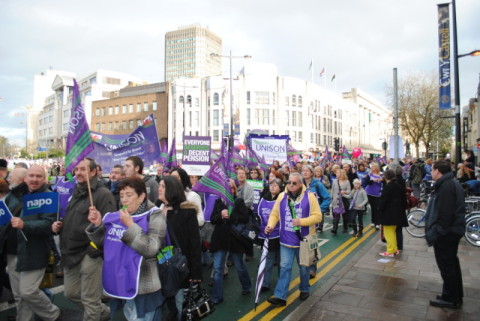 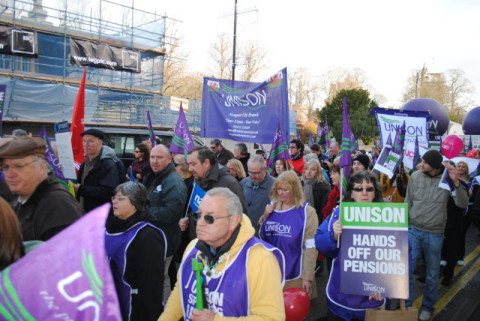 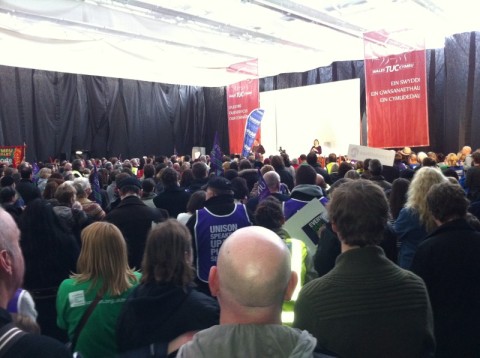 At the TUC conference

(30/11/2011) A gallery of just some of the tens of thousands of public service workers from across Wales who are on strike today over the government's proposed changes to their pensions.

All employees are protected from dismissal during the first 12 weeks of any lawful, balloted, official

industrial action. During these 12 weeks the protection is absolute.  Any dismissal regardless of

how long the employee has worked, or their age, is automatically unfair unless a tribunal decides

the dismissal was not to do with the industrial action.

Thousands of nurses from National Nurses United along with other union members and allies held rallies in six cities across the country yesterday to support the nearly 2 million British workers striking in the UK.

US nurses held the actions at British consulates in Boston, Chicago, Los Angeles, Orlando and San Francisco, and at the British Embassy in Washington, DC, to protest the conservative ruling party's plans to cut public pensions in the United Kingdom.

Corporations in Britain, like the United States, are sitting on massive cash reserves while government officials in both nations push reductions in retirement security and other cuts.

In Washington, DC, where 200 nurses and their supporters gathered at the Embassy of the United Kingdom, Karen Higgins, an ICU nurse at the Boston Medical Center who is co-president of National Nurses United, said: "If people have to keep working with no pensions, it is hurting everyone."

Rajini Raj, RN, agreed: "We're here in support of the more than 2 million people striking in Great Britain today. We know an injury to one is an injury to all even if there is an ocean between us.

Jos Williams, president of the DC Central Labor Council, summed it up, saying: "Today, it is the British workers and tomorrow it is the American workers."

We thank our American friends and colleagues for their support!